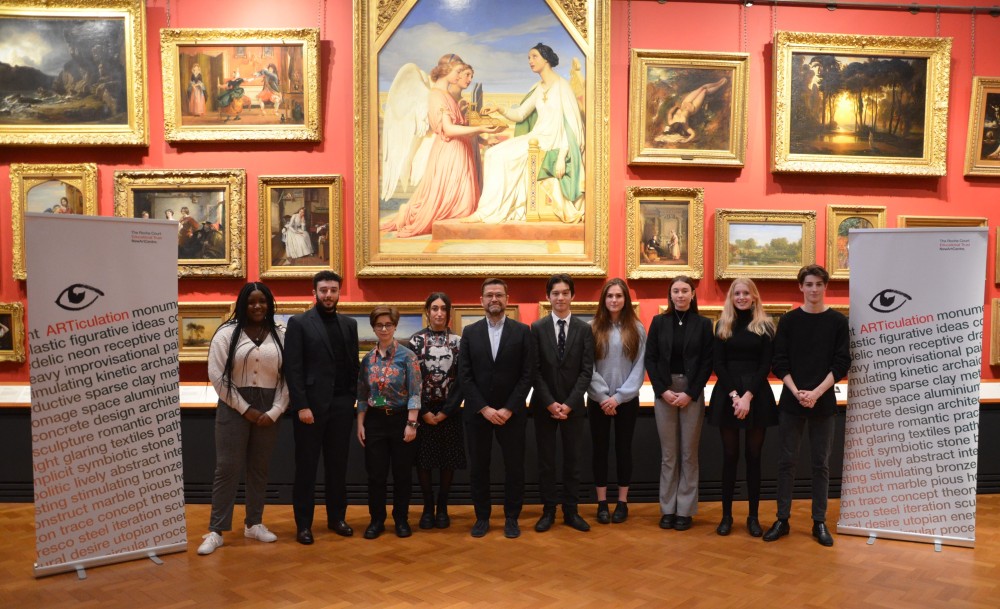 ‘The V&A applies art to inspire’, said Helen Charman, Director of Learning at the V&A, during her introductory to the ARTiculation Prize 2020 [London Regional Heat] at the V&A. Listening to Charman, I could feel the anticipation in the air. Despite being in one of most diverse museums in the world, students were prepared to bring us something new.

The students ranged vastly in their sources of inspiration, making intriguing connections between art and other disciplines. Elia Yousf began the day by drawing on the role drama played in his research into Rothko, providing a dramatic account of the story behind Untitled (Black on Grey), which left us anticipating more. We also heard about the prominent relationship between society’s unwritten rules and our own identities, as explored by Lucia Gester. Looking into the various works of Lynn Hershman Leeson, Gester powerfully argued how women are often constrained by the unwritten rules of society, illustrating how Leeson’s work sought to temporarily free women from such chains.

Other astute connections included the link between art and music, as Francis Bamford’s complex and delicate exploration of Whistler’s Nocturne: Blue and Silver Chelsea proved.
Next, Ava Spark allowed us to learn about the complex bond between art and the artist, analysing Schiele’s Nude Self Portrait seen from Behind. Spark gave us an appreciation of the difficulty viewing his evocative works, whilst not being afraid of their brutality.

Everyone’s personal interests fuelled the discussion about their chosen pieces. These included Greek mythology, as Temi Erinle expertly explored Ezekias’ Attic Black Figure Amphora. Alisha Oner poignantly drew on the power of photography and imagery through her analysis of Nick Ut’s The Terror of War. Oner’s passion came across so vividly in her account that it left the audience silent and mesmerised. In a similarly thought-provoking way, Johan Orly took the audience through a powerful explanation of Rothko’s The Seagram Murals; leaving the audience with some of the deepest and darkest questions of existence that his work evokes. We also heard Luca Ford insightfully explore what defines a work of art, analysing Barnett Newman’s Who’s Afraid of Red, Yellow and Blue III. And finally, Amelia Wartig poetically focused on the woodcut Kristus, by Karl Schmidt-Rottluff, highlighting themes of the suffering and religious enlightenment.

Following these nine artistic journeys, adjudicator Jamie Fobert CBE had the impossible task of selecting two students to attend the London Final. In the end, he chose Francis Bamford and Ava Spark. These individuals explored starkly contrasting works of art in such personable ways, making them deserving winners.

Despite only two students succeeding to the next round, what did all of the heat’s contestants prove? That art is all-consuming. That its connections reach further than we can imagine; that going deeper and challenging ourselves to question what art is will always lead to inspiring results – no matter what your interests or where you come from, as ARTiculation perfectly proves.